About the Kunozan Toshogu Museum

The message of peace that travelled across the ocean 400 years ago.

The clock at Kunozan Toshogu was given to Tokugawa Ieyasu by King Philip III of Spain in 1611. After Ieyasu’s death in 1616 the clock was entrusted to Kunozan Toshogu where it has been carefully preserved ever since. As one of Ieyasu’s cherished personal items, it has been designated as an important cultural property.

This clock has a fascinating history. In September 1609 a Spanish ship ran aground at Iwawada (now Onjukumachi) on the Boso peninsula in present day Chiba Prefecture, east of Tokyo. It is said that local villagers managed to save 317 people of the 373 member crew.
Among the survivors was Rodrigo de Vivero, former governor of the Philippines, at that time under Spanish control. The ship had encountered problems en route from the Philippines to Mexico.
The crew were welcomed to Otaki Castle by Honda Tadatomo and de Vivero went to meet with Tokugawa Ieyasu who was at that time living in Sumpu (present day Shizuoka City). Ieyasu took care of them while they were in Japan and provided de Vivero and his crew with a small ship to carry them to their original destination, Mexico. The ship was built by Englishman William Adams, also known in Japan by his Japanese name Anjin Miura.

Tokugawa Ieyasu understood the importance of international diplomacy and trade. He desired to establish trade and acquire scientific knowledge and technology from Spain. Before leaving for Mexico de Vivero and his crew expressed their gratitude for the help and hospitality that they had been given by Tokugawa Ieyasu in Japan

In 1611 Sebastian Vizcaino visited Japan as an envoy of King Philip III of Spain. Tokugawa Ieyasu welcomed Vizcaino who gave the Japanese shogun a special clock as a gift from the Spanish king. The clock was made in 1581 by the Spanish king’s clockmaker, Hans de Evalo. Ieyasu appreciated the gift of gratitude that had travelled across to oceans and used it as a decorative piece in his room. Since Japan used a different system of time than Europe, the clock was of little more than decorative value in Japan

Kunozan Toshogu was built shortly after Tokugawa Ieyasu’s death. The clock that had been given to Ieyasu by the Spanish king was also given to the shrine as a treasure of the enshrined Ieyasu. It is believed that Vizcaino gave other gifts to Ieyasu from King Philip III of Spain, including portraits of the king and the royal family. These however were lost when Sumpu Castle burned down in 1635.
The clock from Spain was one of Ieyasu’s favourite personal items and has been carefully stored at Kunozan Toshogu since Ieyasu’s death more than 400 years ago. This in turn led to the clock being somewhat of a miracle in modern times

In Europe running a mechnical clock would cause wear to the movement. When the clock was serviced, repairs would also be made and often when such repairs were made the mechanism would be updated to reflect improvements in timekeeping technology. In some cases, the whole movement would be replaced. This means that most very old clocks do not survive in their original condition. Around 50 similar European clocks from the same period as the Kunozan clock still exist. However, most of them do not have their original mechanisms.

The clock given to Ieyasu was not used to tell the time, and after his death the clock was donated to the shrine and kept in storage. Therefore the mechanism inside the clock was not used, and no improvements have been made, meaning that this clock is entirely in its original condition as it was when it was made in the late 16th century.

At the time in Europe when the Kunozan clock was made clocks such as this often had leather travelling cases. These leather cases were often lost or destroyed. In the case of Ieyasu’s clock, the leather case has also survived and been preserved. Ieyasu’s clock is probably the only clock in the world from 16th century Europe that has both its mechanism completely in its original state and its original travelling case. It is unlikely that there are other examples of such well preserved clocks from the 16th century in the world.

In Japan there are no experts specializing in such old clocks from the West. However, the clock was carefully examined in 1954 and 1955 by a group from the National Science Museum led by Sadakazu Asahina. After conducting maintenance, precise drawings of the clock were made.

The existence of a 16th century clock in its original state at Kunozan created interest in other parts of the world, and in 2012 Mr. David Thompson, then curator of horological collections at The British Museum, came to Japan to examine the clock at Kunozan Toshogu. An examination of the clock was carried out by Mr. Thompson from May 15th to May 17th in 2012. The clock was disassembled and studied. The conclusions of the examination done by David Thompson were as follows:

99% of the clock and its parts are the original from the 16th century;
The clock’s leather travelling case is original;
The clock was made with the highest level of skill and precision from the late 16th century and is a masterpiece by clockmaker Hans de Evalo;
The clock is believed to be the only one of its kind in the world

The publication of “The 400 year miracle of Ieyasu’s clock”

Following the study conducted by The British Museum the chief priest of Kunozan Toshogu, Hidekuni Ochiai wrote a book about the history of the clock, from its journey to Japan in 1611 to the examination done by The British Museum in 2012. The book was published in July 2013.
'The 400 year miracle of Ieyasu’s clock': (Heibon Publishing: 1600 yen + consumption tax)

'The shrine is working to have this precious artefact of world history designated a National Treasure in Japan. This book tells the story of Tokugawa Ieyasu and his great achievement in creating the long era of peace in the Edo period (1603-1867), after centuries of civil war in Japan. The book also relates the history of this clock at Kunozan Toshogu. Hidekuni Ochiai

About the museum collection 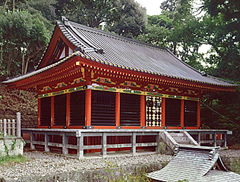 The items that can be seen at the museum include:

The museum has approximately 2000 arts and crafts objects that are organized in different categories.

The museum has approximately 2000 arts and crafts objects that are organized in different categories, including items from the daily life of Tokugawa Ieyasu as well as complete collections of weapons and combat equipment from the Tokugawa shogunate. The items are carefully preserved at the Kunozan Toshogu Museum, and divided into eight different categories: Tokugawa Ieyasu’s favourite items, Swords, Armour, Clothing , Personal effects and accessories, Paintings, Writings and Historic Documents, Others

The items that Tokugawa Ieyasu used in his everyday life in Sumpu form the collection ‘Tokugawa Ieyasu’s personal things’, which have been designated collectively as an important cultural property of historical significance.

In addition to Tokugawa Ieyasu’s own sword, the sword collection at Kunozan Toshogu includes 40 swords owned by successive shoguns.

There are a total of 63 suits of armour, from the leaf shaped Shidagusoku armour worn by Tokugawa Ieyasu, to armour worn by the 15th and last shogun, Tokugawa Yoshinobu.

The collection at Kunozan Toshogu includes sacred clothing, as well as armour used by military personnel after the Meiji Restoration (1868).

Kunozan Toshogu has a significant collection of soldiers’ helmets and other types of head gear worn by court nobles as well as other items used in a military camp. The museum has bows and arrows, a military leader’s fan and an Umajirushi which was used to show where a leader was. One of the most well known items is the Kinsenumajirushi, the golden fan which was the commander's symbol used by Tokugawa Ieyasu.

In addition to the Tosho Daigongen picture of the enshrined Tokugawa Ieyasu , the museum has a collection of works depicting other Tokugawa shogun.

The collection includes written works from different Tokugawa shoguns as well as one written by a woman related to Tokugawa Ieyasu. There are also writings from daimyo feudal lords and the shogun’s retainers from the end of the shogunate in the late 19th century. Each of these has been personally hand written. Handwritten documents relating to Kunozan Toshogu and different generations of shoguns are kept at the museum, mainly dating from the Momoyama period (1573-1603) to the beginning of the Edo period.

Items belonging to the 15th shogun Tokugawa Yoshinobu.
The museum has 15 items from the hobbies that the Shogun devoted himself to after his retirement after the Tokugawa Bakufu government, and the office of Shogun were abolished at the Meiji Restoration (1868). These items include a camera and fishing tool.